If any more proof was required about who the real parents are considered to be in Denmark, then meet skattefar.  Yes, Denmark actually calls the taxman the “tax daddy”.  The clues as to the cultural mentality of the nation are there in plain sight, especially when you think about how the 25% Sales tax is then called MOMs.

When it comes to the tax daddy, he is somehow seen as a benevolent figure when to me, he’s clearly the worst type of Dad there is.  People here believe they can turn to this Dad when they’re having a time of need and he’ll help out.  It doesn’t occur that this Dad sets a terrible example.  He just sits on the sofa all day watching TV, tapping up his more productive offspring for a bit of money to help out, then maybe an hour later, redistributing a portion of it to the weaker children, who are then conditioned to believe he’s a generous, caring Dad.  Those weaker children are never once thinking or realising where the money really came from.  Worse still, he’s mortgaged the house to the hilt, has a load of debts you know nothing about and through the magic of inter-generational government debt has managed to pass on the bill to you, his children and your children too.

It all sounds wonderful, doesn’t it?  If you don’t believe me, then have a laugh at this article here (with accompanying photo), where after a recent tax scandal they are keen to point out Denmark are world champions in fairness, egalitarianism and trust in their institutions.  With good reason, so they claim and we are so much better than Germany, so there!  Actually, the one thing they probably did get right is the size of Skattefar, as he feasts off his children while sitting on aforementioned sofa. 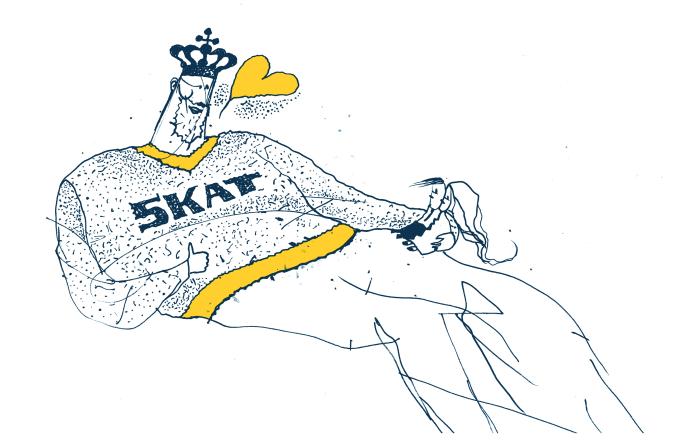 How about MOMs then?  She’s a fairly new entry into local life, having begun as a the gross sales tax to pay for membership of the EU, or EEC as they then called it, under a pretence of being a European Economic Community only.  I have no idea how they even managed to sell this to the people – “Hey, we are joining this free trade association and it’s going to be so wonderful that you need to pay 10-15% extra on everything you consume.  Including food and heating”.  Really, you went for it?  Obviously over the years they put it up to 25%.  The EU must be wonderful for economics that it costs more than not being in it.  MOM, if anything is best represented by Jean-Claude Juncker.  Permanently off her head on gin and living the good life while her household falls apart.

I’ve actually had my own run-in with MOM.  In 2008, after being ripped off by the agent, I ceased trading and left the country.  The story related to me is that 2 MOMs officers came knocking at the door demanding to know why I hadn’t paid the last VAT return.  Simply, there was nothing to pay.  Actually, about 6 months later I got a small refund of the final business costs I’d paid, but it certainly shows how ruthless MOM and Far can be if any of their productive children aren’t handing over some cash for them to enjoy their luxuries.

I revisited an old site I built years ago recently.  I let the domain names themselves go, but the blogger site still remains.   It never made much money at all, even if the resident expert believed I was making secret millions.  It was fascinating to see how cemented my views on all this were even 11-12 years ago.  Also I felt proud of myself for working out so many ways to minimise the ways these two vile parents, skattefar and MOMs can stay alive.  I am glad I worked it out, but at the same time I am wondering why I returned.  I know why, I tried to make sure I was a real Dad with what I considered the right influences for my children, rather than have them grow up believing in skattefar.  I shouldn’t have bothered trying – skattefar is happily dishing out the credits to them on time every month now, while simultaneously tapping me up to help out his lifestyle every month.  Worse still, he does it against my will.  That’s not fair or egalitarian, it’s extortion.