I spent the first part of yesterday replacing a pane of cracked glass in the side door that I’ve been planning to do for about 3-4 years.  Sadder still, I have had the glass for at least 2 years, but I’ve been putting it off because these old doors and windows need careful handling.  Besides, it was only a crack, the glass remained in situ solidly.  Anyway, it got done, along with another pane I’d recently cracked while redoing the windows.  All at the expense of a cut hand.  Not badly cut, but it got me thinking how I really wouldn’t want to go to hospital even if it had been.   I can only envisage how bad it would be, go in with a cut hand, get strapped to the bed, wired up and tested for Corona.  I have a feeling there are plenty of cases like this who become a “…died after testing positive for Covid-19..” statistic.

After that, my intense DIY mode of recent weeks was forced to pause.  Called off due to rain.   After spending a bit of time arranging the CDs into approximate alphabetical order for easier future access, I suddenly thought to myself, you know what, the loppemarkeder are open again, so why not take a trip out and see the world?  Unlike the UK, Denmark didn’t quite descend into the huge restrictions – I guess they assume the population to be so compliant that they don’t need to, the invisible barrier that stops those monkeys climbing to the top of tree is strong here after years of training.   This was actually confirmed, in some small way, by the first one I went to, where half the customers weren’t even Danish, but Eastern European or Arabic.  It was fairly empty anyway and there were bargains to be had.  Especially additions to the newly restarted CD collection.  It’s also interesting what turns up at these places – a few years ago I was restoring an old Edwardian built-in wardrobe in the second bedroom.  A replacement lock was almost impossible to find, until I found a German seller who had one with almost the correct dimensions and ordered it.   Then yesterday I found a stall that had a whole bundle of antique locks, with at least two in the size I needed back then, for the princely sum of 15kr.  I bought the bundle, I can see at least one of them being of use.

20+ CDs and a few other interesting items later – it comes to something when a whole bundle costs about 70kr and one used to cost 100kr+ – I decided to pop off to the nearby Netto.  This is where I encountered my first social policing incident.  Every Danish store now has handwash inside the door that you are supposed to use.  Not sure if it’s enshrined in law yet, but that stuff is not good for you so I don’t and never will use it.  A Dane leaving the store was keen to point out to me where the handwash was, as I took a basket.  I said “yeah” and ignored him.  he didn’t seem to see the irony of his own bad health – being obese and very red-faced.  Perhaps he could work on that instead of policing others?

I suspect this incident was one of the first of many.  In the loppe I had noticed someone glancing nervously while they browsed one stand and I moved closer to browse the stand next to him.  What was I supposed to do, stand and patiently wait until he was done?   To me, the social rules haven’t changed, but if someone thinks they have then they are free to live life as they see fit, by moving away from others, or #stayathome themselves.  Thinking of that one, I recently sold something on facebook marketplace, and the buyer who came to collect the item saw no irony in having a #stayathome on their profile picture.  I guess only other people need to stay at home right?

We laugh of course, because those incidents are fairly minor in the grand scheme of things, but they show where the world is going.  Denmark tried a hotline / website for people to notify of neighbours who they suspected had Corona (I refuse to call it COVID-19, due to the sinister undertones of the acronym).  Even Danes howled in protest and the website was taken down – needless to says 1,000s of names had already been logged though.   New York did something similar, with the snitch hotline, which amusingly people then clogged up with crap, including dubious pics and this classic meme :- 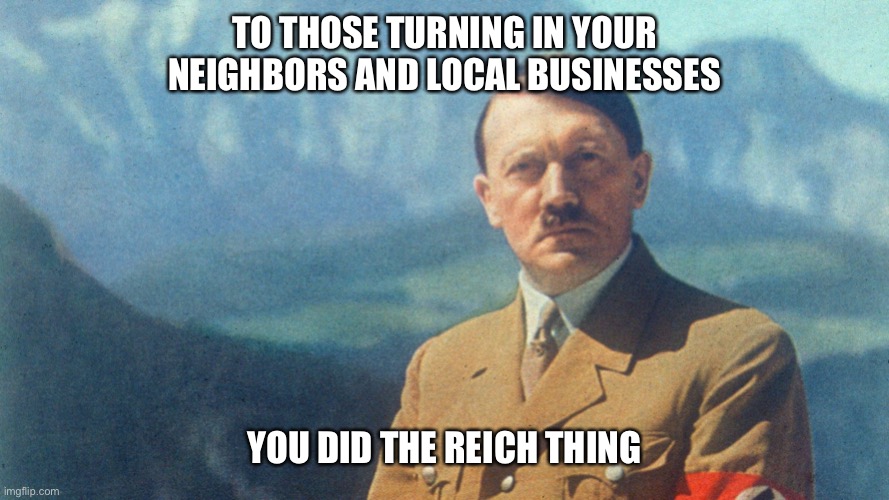 And that’s exactly it, people have previously looked at the rise of Nazi Germany and said things like “how did this ever happen?  If I’d been there I wouldn’t have gone along with it…”.  Well, I can only say, if you have ever wondered how you’d react had you lived in Nazi Germany, or East Germany in the 50s-80s (where half the population were informants, in one way or another), now you have your answer.  The number of facebook posts by supposed friends supporting this loss of personal freedoms, cheering videos of heavy-handed and often illegal policing and posting memes demanding you #stayathome gives you your answer.   Did someone click a collective switch?  I’ve read this story before, in the 1920s book “The Blue Wound”, a forgotten classic that analyses how World War 1 happened.  There’s a line in there about giving people a collective enemy and telling them their way of life is under threat will work every time.  They did it then and they’re doing it now.  Thinking of East Germany, it should be no surprise that the leader of Germany now is Angela Merkel, considering her background with the Stasi, the East German secret police.

So where does this go, who are they making out is the enemy?  The virus is the enemy, but now attempts are being made to apportion blame for the virus.  Ah yes, apparently it’s China.  Who grew this virus in a lab in Wuhan and unleashed it on the rest of the world.  The subtle programming is beginning.  What virus, anyway?  All I see is a recategorisation of deaths.  Deaths in the UK are less than they were in 2018, when a bad flu hit.  Even in the USA, the figures are being inflated by recategorisation even after death of people who were never even tested but are now assumed to have died from it.  That’s a great way to play with statistics.  All I can say is, if China really did release a new virus then so far it’s done a terrible job.  Someone posted infection rates at UK hospitals on fb yesterday to show how terrible it is – the worst rate was 36/100,000 population.  That’s infection rates, not deaths!

If a hashtag is needed, it’s not #StayAtHome, it should be #NoToWarWithChina.