I always hated school and little in the progression into adulthood has convinced me of the value of children being herded into large classes, set to specific timetables from the age of 4 and then told to shut up, sit down and listen.  I’ll never forget my first school day at the age of 4.  I had forever been sure I never wanted to go to nursery, home was more than enough for me.  That first day my mother had to pretend we were just going up to drop my older sister off.  When the awful truth dawned, I screamed and screamed and ran away, but what can a four-year old do?  He must be dragged back in and brought to heel.  Apparently I calmed down and sat in the class quietly but my first question upon escape (hometime?), was – Do I have to go again tomorrow?  Yes you do son, for another fourteen years.  Best not mention college and university yet either, poor lad.

For sure, along the way there were good teachers and good kids as well as the bad, but even now I am convinced I learnt more from my time with Meccano, Riviton and Airfix than I ever did from school.  Actually, I must backtrack slightly.  I learnt that some proverbs are true – A bad apple really can spoil the whole barrel, that you can’t make a silk purse out of a sow’s ear and that empty vessels make the most noise.  I suppose the squeaky wheel gets the oil is also true and believe me, there were a lot of squeaky wheels at my school.  Thankfully nothing squeaks in those corridors any more, not even rats, as the awful place got demolished a few years ago.

Why am I bringing this up?  Well, because that’s the second part of the trap.  Knowing that I was so opposed to my own children starting school aged 4, I was easily swayed by the promise of them not starting until age 6.  The deadline was approaching for my eldest daughter in 2004, that soon she’d be starting in the UK and I really didn’t want that for her, the same pain I’d experienced.  I knew she was of a similar mentality.  One of my favourite phrases of hers was “Do it self”, whenever I tried to help her on the Park climbing frames and such self-reliance reminded me of myself.  In this way, Denmark was very appealing.

I shouldn’t have believed it.  Within 2 months of arriving in Denmark, still without any income for either parent, hemorrhaging money on expensive house improvements and having an empty unsold house in the UK, my daughter was signed up for Danish børnehave, despite my protests to the contrary.  I was told I was anti-social and that children needed someone to play with.  Not only was I suspicious of the system, but the cost even then was about £150 a month.  Despite being promised it was all about play and flexible, it was identical to English nursery or infant school – the same timetables, brainwashing and exposure to unpleasant children I remember too well myself.  She didn’t need it and I was the lone voice saying we couldn’t afford it and that I didn’t agree with it.  Too late.

I tidied up my paper folders the other day, some 14 years later, and found some of those bank statements.  They make horrific reading, even now they made me feel incredibly sad, knowing the story behind every minus transaction on my account.  Everything I had worked and saved for, disappearing drip..drip..drip, as if my wrists had been lacerated and I was lying on a bed, bleeding out slowly every month.  It seems like an appropriate metaphor that by 2010, all the blood really had drained out of me and I needed a blood transfusion, but that’s another story for another day. 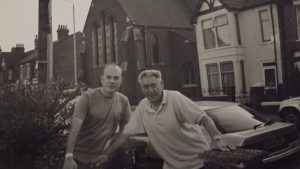 I found a photograph the other day, while clearing out the basement.  It’d somehow got left and stuck between a load of other less important old photos.  With careful soaking and drying, then framing, I’ve ended up with this.

A father and son, pictured outside the son’s house – Park Road, Sittingbourne in Kent.  Complete with my Citroen Xantia in the background.  If pictures tell someone a thousand words, then this one tells me at least double.

Firstly any picture with me in it is a major rarity.  I’ve just never liked getting my photo taken.  Secondly, I see the fear in my eyes and the sadness in my Dad’s.  He’s just found out that his son is moving abroad and that those rare times he sees him are going to become even rarer.  So why am I feeling that fear?

Well, I’ve just heard that a house has come up for sale in Denmark.  A house that’s going to fulfill a promise I made way back in 1998-99.  As a result of this promise, I’m probably moving to a foreign country where I won’t have a job, won’t be able to speak the language and will somehow have to support a partner and two young children.  The stress is already building up.  How does that story progress and how does it end?  Well, I don’t yet know how it ends, but I do know now that it’s going to mean me going from owning a £250,000 house outright to reaching December 2016 living in Denmark, with no money in the bank and having a debt of the equivalent of £150,000.  Oh, and by the way, I’ll also have lost my 4 children too and be living alone.

To top it all off, my Dad died that same month, December 2016.  I went over at the beginning of December to spend that last week with him as he passed away, then again to stay over Christmas, attending the funeral and giving a eulogy on what he’d taught me.  Those values of hard work, self-reliance and thriftiness he taught me were clearly lost to my own children – mere velfærd seems more likely to be their mantra for future years, with the familial company they now keep.  I was told by their mother that they weren’t bothered by the death of their one true grandfather, that the eulogy I’d written meant nothing to them and that I was a bad dad for travelling back on Christmas day.  Apparently I should’ve sat and rotted away in the house in Denmark alone that day, waiting for the one hour visit of my son.  Actually, Christmas Day was a great day, even if I slept through a lot of it.  Remembering my Dad with close family back in my true home town.

So when I look at that photo again, I really can’t imagine what I had to be fearful of.

Thanks Dad, for appearing just when I needed you there to help me know I’m making the right decision.